The Traveller's Guide to a Protein Rich Diet

Maintaining a healthy diet while travelling can be a big challenge. Business travel involves hectic schedules leaving no time to prepare healthy meals. Fast food and snacks become an easy substitute. For others, travelling to a new destination and experiencing the local cuisine is the highlight of their trip.

Protein is an important nutrient for sustaining muscle. Unlike fats or carbohydrates, our body does not have a back up supply of protein. So we need to make sure our body gets enough of it. The good news is there are lots of foods that naturally contain a high amount of protein, which can keep you in shape while you travel.

The recommended daily protein intake is 56 grams for men and 46 grams for women. To help you sustain this while travelling, here is a list of protein rich foods from across the world. 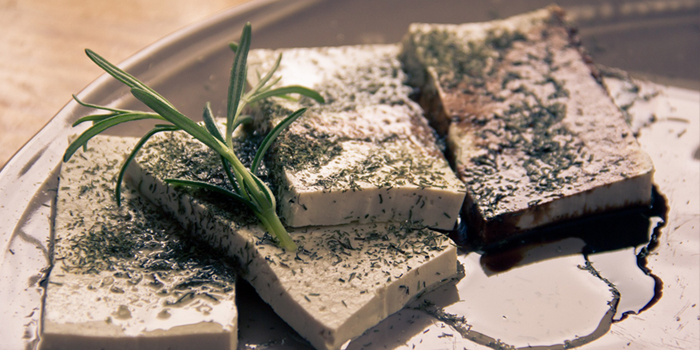 This traditional soy product originates from Indonesia but is popular among other South East Asian countries. Tempeh is similar to tofu in the sense that it’s made from soybeans but the fermentation process and it’s retention of the whole bean means that tempeh has a higher content of protein, dietary fibre and vitamins. The taste and texture of tempeh is also much stronger. One cup of tempeh contains 31 grams of protein.

Tofu is a popular component in East Asian and Southeast Asian cuisines. Tofu soaks up salty, spicy and savoury flavours, making a delicious and healthy meal. It contains less calories than chicken. 3oz of chicken contains 131 calories, whereas, tofu contains just 79 per 3oz. One cup of tofu contains 20 grams of protein and is suitable for vegetarians.

Soy milk is a traditional staple of East Asian cuisine. This plant based drink is produced by soaking dried soybeans and grinding them in water. One cup of soy milk contains 6 grams of protein. 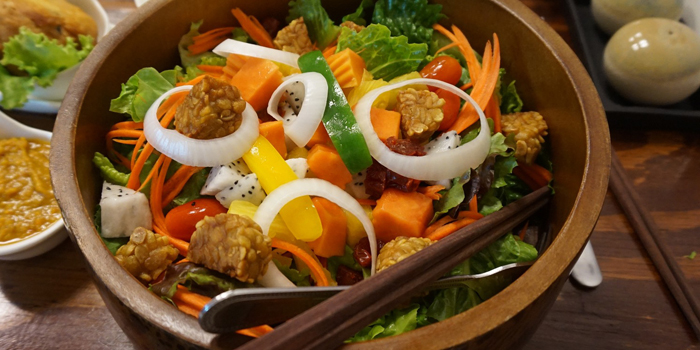 A cup of green peas contains the same amount of protein as a cup of milk – 8 grams. And is a great source of other vital vitamins. Avoid wasabi peas which are high in calories, salt and MSG.

Broccoli contains essential vitamins and nutrients including potassium, vitamin C, K, B6, E, B1 and A. Potassium reduces the risk of heart disease, anxiety and stress and enhances muscle strength and metabolism. One bunch of broccoli contains 17 grams of protein.

TIP: If you're planning a holiday, book ahead with Air BnB to rent an entire home or apartment with a stocked kitchen. This will allow you to prepare healthy meals. Head to the local market and pick up lots of broccoli. If you are travelling for a long period, book hostels with shared kitchen facitilites. Preparing your own meals will save you money and is a great way to meet new people. Each hostel guest can prepare a local dish from their home country for everyone to share. 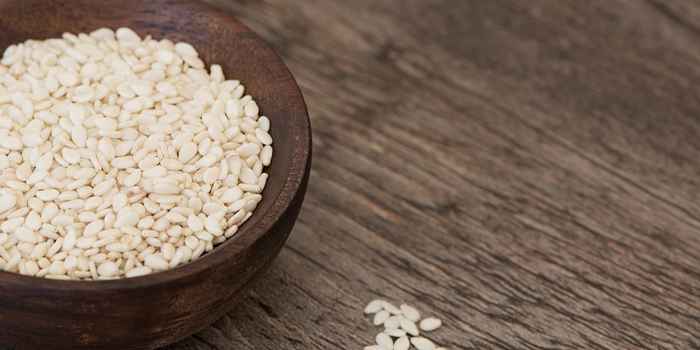 Flax seeds are cultivated in the cooler regions of the world. They are a great source of protein and fibre, vitamin B and contain 54% omega-3 fatty acids which can reduce the risk of heart disease. One cup of flax seeds contains 26 grams of protein.

Another great snack for long travel days, sesame seeds are produced in popular backpacking destinations including China, India, Myanmar and Tanzania. One cup of sesame seeds contains 26 grams of protein.

Most people think of Quinoa as a grain, but it's actually a seed which originated thousands of years ago in the Andes Mountains. Once a staple food in Bolivia and Peru, Quinoa has gained popularity in the West due to its nutritiounal value. One cup of quinoa contains 8 grams of protein. 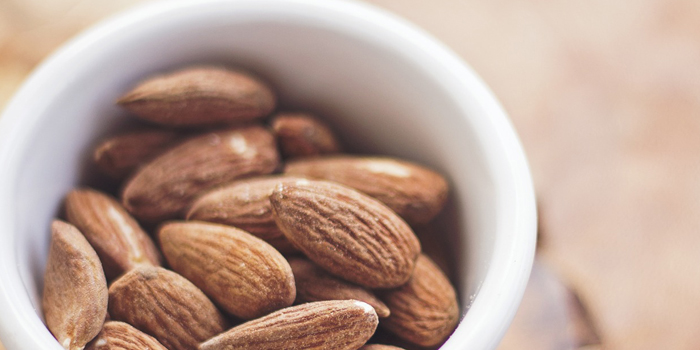 Nutritious and versatile, peanuts are a vital staple in the diets of people around the world. Although today ubiquitous across the globe, the peanut was native only to South America, and it is believed to come from the foothills of the Andes in Bolivia and Peru. One cup of peanuts contains 38 grams of protein.

Southwestern Asia is the native region of the almond tree but 80% of the worlds almonds come from California. The good news is they can be purchased across the globe. Almonds contain lots of healthy fats and fibres, magnesium and vitamin E and can promote weight loss as they reduce hunger for longer. One cup of almonds contains 30 grams of protein.

Peanut butter was first introduced in 1904 and became a source of delicious protein during the first two world wars. If you are travelling to North America, peanut butter will be readily available in most grocery stores. Unfortunately, it isn't quite so easy to find in the rest of the world. 2 tablespoons of peanut butter contains 8 grams of protein.

Lentils are an edible pulse and annual plant of the legume family. Dhal (curry or soup made from lentils and seasoned with spices) is a dietery staple throughout regions of Nepal, India, Pakistan and Bangladesh, where this dish is often served with rice or roti. One cup of cooked lentils contains 18 grams of protein.

Although beans are native to the Americas, rice and beans is a common and inexpensive dish in many parts the world. Cooked black beans, kidney beans, pinto beans and chickpeas all contain 15 grams of protein per cup. They are also high in fiber, calcium, and iron and include a full compliment of essential amino acids. If you are heading to Brazil, be sure to try their traditional blackbean and rice dish.

Most commercially canned baked beans are made from haricot beans, also known as navy beans. Despite the name, baked beans are usually stewed in a sauce.  A great source of fibre and iron, one cup of baked beans contains 14 grams of protein.

Hummus is a popular dip in Egypt and Isreal made from cooked, mashed chickpeas, blended with olive oil, tahini, lemon juice, garlic and salt. Today, it is popular throughout the Middle East, North Africa, and in Middle Eastern food around the globe. It can be found in supermarkets in Europe and North America. 100 grams of hummus contains 8 grams of protein.

The name "Parmesan" is often used generically for various simulations of this cheese, however, only cheeses produced in Parma, Reggio, Emilia, Bologna, Modena and Mantua in Italy can use the full Italian name of Parmigiano-Reggiano. If you are travelling to these areas, be sure to experience "The King of Cheeses". 100 grams of parmesan cheese contains 35 grams of protein.

Mozzarella is a southern Italian cheese traditionally made from Italian buffalo milk. Today's mozarella is made with cows milk. Mozarella is popular among European countries and is also America's most popular cheese (based on sales figures). If you're travelling to these countries, mozarella will be readily available. 100 grams of mozarella contains 25 grams of protein.

Cheddar originates from South West England. It is the most popular cheese in the UK and is widely consumed among other European countries as well as Australia and Canada. 100 grams of cheddar cheese contains 23 grams of protein.

Cottage cheese is popular among dieters and some health food devotees. It is a favourite food among body builders, weightlifters, runners and swimmers for its high content of casein protein (a longer-lasting protein) while being relatively low in fat. 100 grams of cottage cheese contaims 11 grams of protein.

Greek yogurt is yogurt that has been strained to remove its whey, resulting in a thicker consistency than unstrained yogurt. Despite the name, 'Greek Yogurt' is virtually unknown in Greece.  Strained yoghurt is used in Greek food mostly as the base for tzatziki dip. Greek yogurt is popular in Western countries and is also widely eaten in Levantine, Eastern Mediterranean, Central Asian and South Asian cuisines, where it is often used in cooking. 100 grams of greek yogurt contains 10 grams of protein.

A couple of eggs for breakfast is a simple way to add protein to your travel diet. Each egg contains 6 grams of protein. Order them poached or boiled as a healthier alternative to fried eggs.

Chicken is eaten in every country and no matter where you travel to, you’re sure to find a chicken meal at a nearby eatery, fast-food place, supermarket or restaurant. One chicken breast contains 34 grams of protein.

Lamb and mutton is consumed in many parts of the world. A sheep in it's first year is called lamb, as is the meat. The meat of an adult sheep is mutton, a term only used for the meat. The term 'Mutton' in South Asian countries is applied to goats meat. One piece of lamb chop contains 28 grams of protein.

Pork is the most popular meat in East and Southeast Asia, and is also very common in the Western world. Pork is prohibited by Jewish and Muslim dietary law. Throughout the Islamic world many countries restrict the importation or consumption of pork products. If you travel to countries such as Iran, Mauritania, Oman, Qatar, Saudi Arabia, Kuwait, Libya, Pakistan or Maldives, pork will not be available. One pork chop contains 27 grams of protein.

Although beef is consumed across much of the globe, if you are travelling to India it may not be available in the state you are visiting. In many Indian states, the slaughter of cows is illegal. Instead, buffalo meat finds a place on the plate as beef's alternative. One beef steak contains 27 grams of protein.

The word 'jerky' comes from the Native South American Quechua term "ch'arki" which means dried meat, and was well received in Europe by the Spanish in the 1500's when it was introduced during the early conquest of the Americas. Jerky is a lean meat that has been trimmed of fat, cut into strips, and then dried. Choose a jerky manufacturer that has cut back on the sodium for a protein rich travel snack. One packet of beef jerky contains 10 grams of protein.

The Tuna species are found throughout the world's oceans. Tuna fish has very high levels of omega-3 fatty acids, which help to reduce cholesterol in the arteries and blood vessels. 100 grams of fresh tuna contains 30 grams of protein.

Shrimp and prawn are important types of seafood that are consumed worldwide. Shrimp is low in fat and contains calcium, potassium, phosphorus and is a good source of vitamins A and E. 100 grams of prawn contains 24 grams of protein.

The northern red snapper is a species of snapper native to the western Atlantic Ocean including the Gulf of Mexico. It is a low-calorie, lean source of protein that is rich in selenium, vitamin A, potassium and omega-3 fatty acids. One serving of 4 oz red snapper contains 23 grams of protein.

Salmon are native to tributaries of the North Atlantic and Pacific Ocean. Many species of salmon have been introduced into non-native environments such as the Great Lakes of North America and Patagonia in South America. 100 grams of raw salmon contains 20 grams of protein